Cain Velasquez. Why do you exist?

Cain Velasquez is the newly-crowned UFC heavyweight champion, defeating Brock Lesnar via TKO in the first round of their title match at UFC 121. He possesses light-heavyweight speed, brilliant wrestling, a Neanderthal-like jaw, and tremendous knockout power. Along with the title of champion, Cain also holds the title of scariest motherfucker walking the planet today.
Since gaining knowledge of this demon's existence, my life has been at a stand-still. I can't even leave my fortress of a room due to the simple notion that he is somewhere out there, molesting giant men into submission with those dual-wielded wrecking balls that he calls fists. This brown-pride having, lesnar-trampling cholomonster doesn't even realize the fear he's invoked in the deepest of my cockles. I cry myself to sleep, then I dream about him and cry myself, mid-dream, right the fuck back awake......only to think about the behemoth more and CRY MYSELF TO SLEEP. AGAIN. I compiled a list of 1000 reasons Cain Velasquez is the baddest motherfucker on the planet. I then ate said list in hopes to gain said badassness (or perhaps deplete said badassness from said cholomonster). Didn't work. And sadly, consumption of the list took me nowhere but a state of deeper depression. And from this state, in my anti-Velasquez'd fortress, I give you three of my 1000 reasons:
Reason #1: 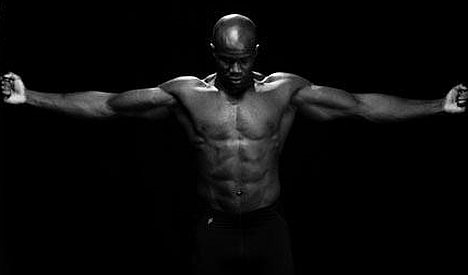 If, after viewing the above picture, you did not defecate upon yourself and/or/with your wives and kids and pets, then you are Cain Velasquez, and you should stop reading now. Please. I'm sorry.
IF, however, you and your wives and kids and pets are now blanketed in a conglomerate of your fecal matter(s), feel free to keep reading...
Many of you may be under the assumption that the above picture is Cain “El Vato” Velasquez. No, it's not, dumbasses. The above picture is of a man whom I'd rather have throw uppercuts directly into my unprotected sack for eternity than to ever even shake the deathgrip boulderhands of Cain Velasquez. The pictured manbeast is Cheick “Mate, nigga” Kongo. Now, before we go any further with Kongo, let's look at his name alone...
Kongo
If that last name doesn't scream bloodthirstyafricankillingmachinegorillaman, then I don't know what does. Facts aside, Kongo was the most imposing, period-inducing giant I had ever seen. His UFC record may not indicate much, but if you take one look at the man, you'll realize why any fighter in their right mind would not want to step into the octagon with him. JUST LOOK AT THE SHINE ON THAT SKULL. Back then, the “death-by-Kongo” nightmares were regular to me (he had more of a deep-tribal accent in the nightmares, though. None of that strange, ill-fitting French noise that seeps from his gullet in reality.)
But then, June 13, 2009 happened.

That, is Cain Velasquez, 240 pounds of Mexican-American-Frankensteinian MMA perfection, illustrating how to demolish the scariest thing I had laid eyes upon up until that point. Seriously, take a look at that image one more time. Cain picks the beast up, ABOVE HIS HEAD, and attempts to make the beast disappear by throwing him through the mat of the octagon and onto beast-hell. In seeing that the beast had failed to vanish, the image then depicts Cain viciously beating upon it's vital organs and skull in an attempt to make enough ground Kongo-beef for his family's dinner late that evening. (Perhaps extended family as well. As mentioned earlier, Cain is Mexican-American). Jesus Christ. I'm crying.
Reason #2: 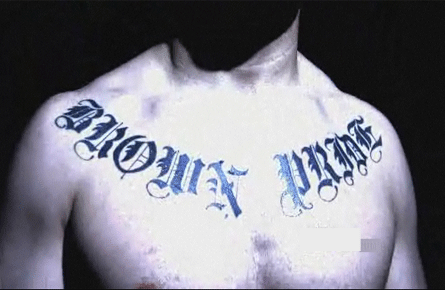 The above picture is of Cain Velasquez's tattoo. “Brown Pride”, emphatically scribed across his chest for the world to see.
This “tattoo” is proof that Cain has done one, if not all, of the following:
1.Killed somebody via knife/blade/shank/can opener/can lid/sharpened bone. 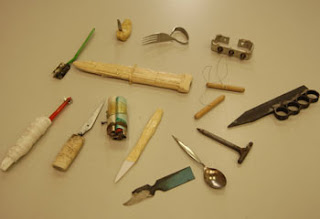 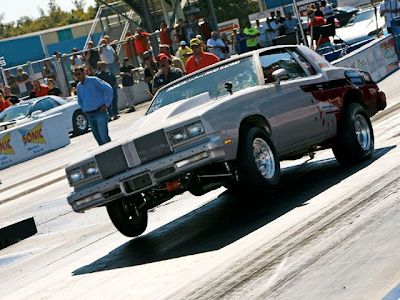 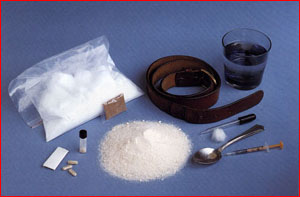 Ask me if I'd rather lock myself in my room forever or live in a world where there's a possibility that a 240-pound, meth'd-out UFC champion will chase me down in his gigantic fucking Cutlass and proceed to cut me to death with the sharpened bones of those he has killed. Yea. Exactly. Don't even ask me anymore, stringing those words together is enough to make me wanna end my misery before I even reach reason #3.
Reason #3: 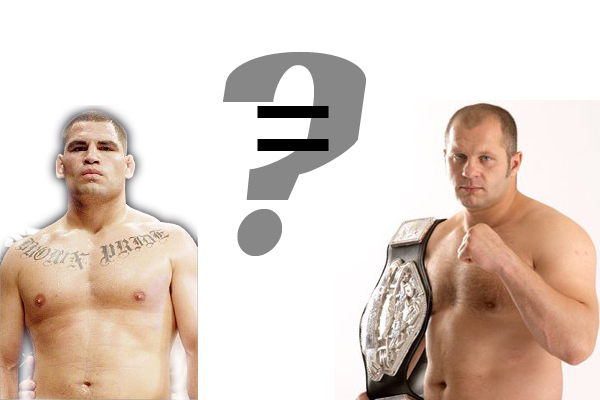 If Cain Velasquez isn't a scientifically-engineered and improved reincarnation of Fedor " The Last KGBadass" Emelianenko, then, then nothing, he is. He is a well-oiled and maintained machine, which could not have been created through natural means. I'm talking micro-chips, plasma, and fucking STEEL people. Fedor is 32-2. 32 wins, and 2 losses. Clearly, there was a mishap when creating the Russian fighter, so the scientists turned to their laboratories in Mexico instead. The product? An undefeated, skull-crushing chupacabra named Cain Velasquez.

It's obvious, as they BARELY changed the physical attributes on the newly modeled MMA-bot that is Cain. He is Fedor V2, without a doubt. Take Fedor, shave his chest, do some quick cosmetics on the face, then slap-on a blatant "BROWN PRIDE" tattoo to distract the general public....... and what do you have?? 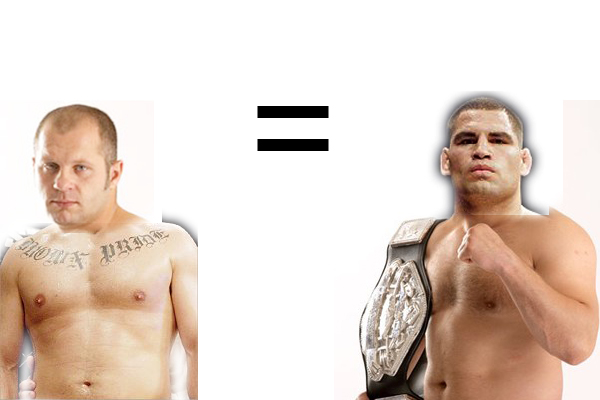 CAIN "The Next-Gen Emperor" Velasquez. Thank you.
Posted by King at 9:58 PM 1 comment: